Whenever the sky is all set for a gorgeous sunrise or a show of similar grandeur, an inner voice whispers and I absolutely trust my intuition. So when I woke up in the wee hours of the morning for reasons unknown to see the orange-pink streamers scattered over the sky, I knew that it is a clear announcement of a splendid drama to be staged at dawn. I ventured out, and a mesmerising sunrise was waiting out there…How can I resist sharing this beautiful one from Emily!

I’ll tell you how the Sun rose –
A Ribbon at a time –
The Steeples swam in Amethyst –
The news, like Squirrels, ran –

The Hills untied their Bonnets –
The Bobolinks – begun –
Then I said softly to myself –
‘That must have been the Sun!’

I stood there entranced looking at the frills of clouds raising, admiring the Sun who dipped the buildings and the Saigon river in liquid gold! The city line swam in amber, not amethyst though. I had the little Fan tails around me to replace Emily’s bobolinks.

Autumn and Winter are known and felt through poems, stories and pictures for a person like me, who has lived all her life in tropical zone. While standing at the riverside I visualised how the hills would have untied their bonnets! Snow from the mountain tops melting away at sunrise could not have been painted better.

But how he set – I know not –
There seemed a purple stile
Which little Yellow boys and girls
Were climbing all the while –
Till when they reached the other side,
A Dominie in Gray –
Put gently up the evening Bars –
And led the flock away –

Surprisingly,  in this poem Emily is ignorant of how the sun sets. The same Emily who gave us sunset in a cup, who talked about the sunset washed land, who painted the housewife in the west busy with many coloured brooms sweeping, missed the setting sun here.

I have experienced a similar disappointment recently.  October sunsets are generally stunning in Saigon, but this year every single sunset was swallowed by a mean, grave looking cloud! Every evening there were preparations for a gala sunset but a dull grey cloud  as vast as the sky would come from nowhere and hide the sun.

Despite the touch of dismay, the brilliant imagery in the second half brings a broad smile to me. I visualised bouncy school children climbing up the stile and their warden in a grey attire hurrying to put the bars and sending them back to their respective rooms. How well I can relate to these lines! There was no compromise on discipline during my hostel life; the good old warden sisters were particular that all of us were inside the building premises before nightfall. No mischief was allowed. The Carmelite nuns of my alma mater Mercy College, gliding in their flawless white habits like good shepherds guided and admonished us without fail. Beautiful memories of hostel life that I cherish even now.  Mischievous children should be promptly supervised hence all the scattered golden bouncy clouds were gathered by their watchful warden clergy in his grey habit and were put behind the bars. And Emily missed the Sun setting. 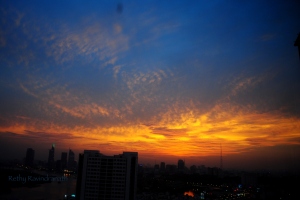 P.S~I interpret Emily, the way I understand her.

7 thoughts on “I’ll tell you how the Sun rose…”