The black–hooded oriole (Oriolus xanthornus) or manjakkili as we call it in Malayalam is considered a harbinger of Onam, the harvest festival of Kerala. Generally a few of them  are spotted  in the months of July to September. Since the bird appears close to the festival, it is called Onakkili as well.  With their  striking bright and golden yellow plumage they are a sign of prosperity! Surprisingly during my visits in November-December in the past few years, I get glimpses of the bird at Anakkara. Times have changed, climate has changed and the migratory birds have changed their times too. Contradictory to the old concept, every day is an Onam, a day of bounty for Keralites. The bird knows it doesn’t have to wait for Onam to remind people that days of plenty are round the corner!

I could click a fairly decent photo of the bird sitting atop our mango tree this August; a satisfying experience compared to many of those failed attempts in the past.  I haven’t seen a camera shy bird like the oriole! She is as fast as lightning and a trickster too. She charms you with her distinct call from secret hideouts and flashes her gold to lure you, then vanishes! Just like the golden deer Maricha that enchanted Sita, the golden bird is bewitching. Unlike other winged friends who visit our Kousthubham premises, Manjakkili has no scruples regarding punctuality!

How can I not share Emily Dickinson’s Oriole here! Who can give a more vivid and vibrant picture of the bird! I don’t know if you have to read between the lines or whether there are many different layers of meanings; to me the poet talks about the bird Oriole.

One of the ones that Midas touched,

Who failed to touch us all,

Was that confiding prodigal,

It is no exaggeration that the bird is extravagantly touched by Midas!  A proven prodigal, the dazzling bird can easily be mistaken for an alighting mine. And Emily aptly calls the Oriole the meteor of birds. Both the references of Jason and Midas perfectly blend in with the Oriole.

So drunk, he disavows it

So dazzling, we mistake him

For an alighting mine. 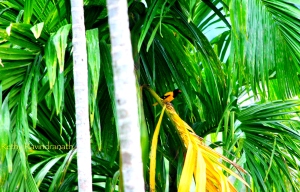 A pleader, a dissembler,

An ecstasy in chief;

The bird is called an epicure, a thief and a dissembler! What a trickster he is! He keeps your hopes afire and then hides in thick foliage, giving fiery glimpses only. It bewilders me when Emily blames the bird  for cheating of ‘an entire attar’ (Does the bird stand for someone who came into her life like a flash of lightning and then left suddenly?) or is it ‘altar’ instead of ‘attar’ as the church imagery is obvious-  ‘Jesuit of orchards’ and ‘oratorio’- Doubtlessly the bird has a divine aura.

He cheats as he enchants

Of an entire attar

For his decamping wants.

Like a regal and pompous court musician, he comes sings and leaves the scene. I am convinced of  his decamping wants from my experience too!

The splendor of a Burmah,

The meteor of birds,

Of ballads and of bards. 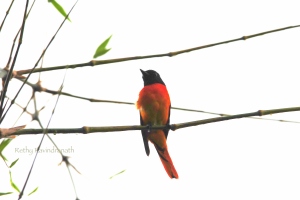 I never thought that Jason sought

For any golden fleece;

But then I am a rural man,

With thoughts that make for peace.

But if there were a Jason,

I wanted to tell Emily that Jason could look for his golden fleece on our mango tree as well. Somehow I draw parallels between the apple trees of Emily and other American poets with our mango trees. Whether it is ‘when a drop fell on the apple tree’ or Frost’s ‘After Apple-picking’ I tend to make comparisons.. 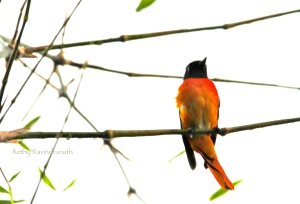 During my recent trip to Wayanad, a hill station in Kerala I met this cousin of the black hooded oriole, sitting on the bamboo plant like an orange torch ablaze!  could it be the the Baltimore Oriole?  My excitement made the capture out of focus and shaky.

A couple of photos clicked a few years ago. Seen in the second picture is the black-naped oriole that visits Anakkara sometimes. 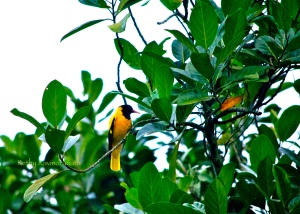 Concluding with another beautiful Oriole song from Emily which states a larger truth. It is not the music, but the fashion of the ear that attires the music. Whether the music you hear is divine or common is left to your choice. The divine music is not from the tree but it is within you.

To hear an Oriole sing
May be a common thing —
Or only a divine.

It is not of the Bird
Who sings the same, unheard,
As unto Crowd —

The Fashion of the Ear
Attireth that it hear
In Dun, or fair —

Let us look forward to many tuneful and divine melodies as September dawns. May the music change colours from dun to fair as we listen! Unheard music may be sweeter!