It’s been a month since we moved into the capital city of Cambodia, Phnom Penh and this strange statue of a monkey king holding a lady, half human and half fish, right in the middle of a small pond in a neighbour’s house captured my attention. The barking of two little fancy dogs (who thought themselves ferocious) stopped me from getting a closer look of the small statue every time I walked past that house. Later I found similar statues in one of the souvenir shops but the girl in the shop failed to explain to me whose statue that was. During a trip to Kep, a small beach town, I saw this beautiful statue on the way and this really kindled my curiosity. Then I started researching about the monkey and the lady.

Hanuman and Sovanna Maccha- a statue at Kep, Cambodia

At the souvenir shop 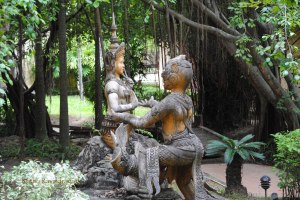 The one at the cultural village, Siem Reap

As I rightly guessed it’s the statue of the mighty Hanuman, the vanar god, flawless devotee of Lord Ram. Hanuman, also known as Vayuputra or the son of the Wind god in Hindu mythology, is the personification of strength and knowledge. Hanuman is renowned for his unconditional devotion towards Lord Ram and is considered one of the eight Chiranjivis (Immortals) in Hindu mythology. A great singer who could melt the hardest of rocks with his heavenly music, Hanuman is well-known for his celibacy too. He is one of the strongest characters in the Indian epic Ramayana.

In the Khmer version of Ramayana, Reamker, there’s another story (in the Thai version too, I have read). Ravana’s daughter Sovanna Maccha (the Golden Mermaid) falls in love with Hanuman. During the time of ‘Sethu Bandhan‘ (the building of the bridge across the ocean to reach Langka) Ravana sends his daughter with her accomplices to jeopardize the task. The rocks, the monkey troop throws into the ocean disappear the next morning. To solve the mystery of the missing rocks, Hanuman dives down into the sea and meets with this beautiful daughter of Ravana. He realises that the rocks were carried away by the mermaids as per the instructions of their leader Sovanna Maccha. Though she tries to evade Hanuman in the beginning, very soon Sovanna Maccha falls in love with the mighty Hanuman and thus goes the story … 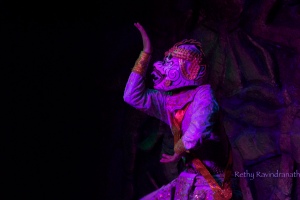 Sovanna Macha and Hanuman as they appear in the Smile Of Angkor show, Siem Reap

There are dance dramas retelling the love story of Hanuman and Sovanna Maccha at different places in Cambodia. But somehow my Indian psyche couldn’t find the masked face of the Khmer Rambhakth very much pleasing (apologies). I have in my heart etched a more pleasing, beaming face of a Hanuman filled with kindness and flawless devotion for Rama; he has the face of the Hanuman of a framed photo in our pooja room (later many people back in India loved the face of Dhara Singh’s Hanuman in Ramananda Sagar’s Ramayana!)

It was a delightful experience for me when The Kalakshetra troupe from Chennai came to Phnom Penh and performed a three-day Ramayana dance drama. It was an enthralling experience and the performance of the person who enacted Hanuman in the ballet was astounding! 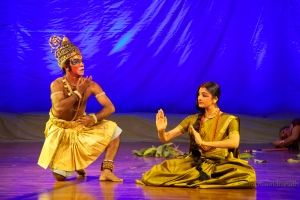 This beautiful sandstone carving of Rama on Hanuman’s shoulders is one among our favourite possessions, a bit of Cambodia and the beautiful memories associated with that country.

4 thoughts on “Hanuman and Sovanna Maccha”